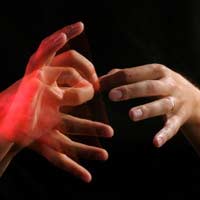 While it may not be accurate to describe deafness as an illness, for researcher Claire Donaldson, 38, from Suffolk, her son’s diagnosis lead her to an interesting return to work.

With ten years’ experience as a medical researcher, Claire was expecting to return to her job after taking maternity leave to have her son Joshua eight years ago. But the first few months of her baby’s life also turned her own upside down.

Claire explained, “I actually thought Josh had issues with his hearing quite early on, as he would react if he saw my face, but not if he couldn’t see me, even though other babies at our mother and toddler group would look around if they heard their mums. So when Josh had his regular check up and he was referred to a specialist, I wasn’t totally surprised. But of course, I was devastated that his life might be harder than it needs to be because of a hearing issue, so I was determined to do everything I could to make it as good as possible.”

Once Claire’s fears about Joshua’s hearing problem were confirmed, she devoured all the information she could find about bringing up a hard of hearing child in a hearing family.

“I did find plenty of information, but it all seemed too scientific and unemotional – and as a medical researcher I’ve certainly got the right background to make sense of it! Rather than trying to find someone else that could help my son, my husband and I decided that I would learn sign language and teach Joshua myself as early as possible, so that he could quickly integrate into school and express himself, rather than waiting for him to be taught it.”

Claire found that her GP was very supportive, and was able to refer her to a specialist that could help. She also found a British Sign Language course in her local city and did some voluntary work at the school they expected Josh would attend when he turned five.

Claire added, “My husband would ask me to teach him whatever I learnt so that we could both communicate with Josh, and my parents and in-laws were also very keen to learn. We were conscious that we didn’t want to make the whole family all about Josh’s hearing though, so we were careful to include him in our hearing world as much as possible, rather than us just go into his world. We did this by taking advice from a deafness advisor who told us about using rhythm in the house as much as possible, and speaking slowly and clearly so Josh could start to lip read, which will be a really valuable skill as he gets older and gets used to the outside world.”

Retraining as a Teacher

“Once I’d completed my sign language course, I was asked by the school if I wanted to work as a learning support assistant with the class of deaf children aged from 5 – 7. I was really excited by this challenge, but was well aware that the pay for a learning support assistant really isn’t that great. I decided to train as a teacher instead, and signed up for a one year PGCE. The school were really supportive and I continued to work voluntarily throughout the year, which meant that I was in the right place at the right time when a full-time job came up.”

For Claire, the emotional difficulties of learning to encourage and handle a hard of hearing child has opened her life up to a richness she did not have before. Claire concluded, “I know it may sound like a cliché, but Josh’s deafness has really brought our family closer together. I would not have chosen this difficulty for him, as life is hard enough even if you seemingly have everything going for you. My return to work as a teacher for deaf children gives me far more satisfaction that my research career ever did, as I feel like I’m making a real difference to Josh and other children like him – it’s such a fulfilling job, and no two days are the same.”