Night Class Helped Me to Return to Work: Case Study 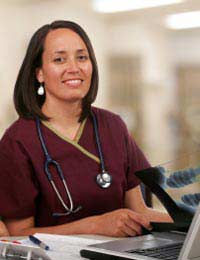 As an experienced nurse, Ellie Norman, 42, was sure that her skills would be welcomed in the NHS when she decided to return to work after eight years spent bringing up her two children. Unfortunately, the opportunities Ellie was expecting were not there.

Ellie explained, “I had gained excellent experience in the twenty years I’d worked as a nurse, having working up to RGN level with considerable knowledge of ward practices, so I was convinced that I would be able to find a role when I wanted to return to work. I knew that perhaps I would need to go on a refresher course and I was fully prepared to take additional training in new practices, but I was not prepared to find that there were no hospitals that would accept me.”

The reason that Ellie was not welcomed back with open arms actually had very little to do with her skills – although all the hospitals, private nursing homes and trusts that she applied to made it clear that she would need to take refresher courses – but more to do with her lack of IT skills.

She continued, “I had never needed IT skills when I worked before as very little of my work involved anything on the computer, and whatever did need computer work was always done by someone else. When I kept getting told that I couldn’t be offered a job because of my lack of IT skills, I knew that I ought to do something about it as computers aren’t going away! I thought it would also be good for me in my social life too as more and more events were being organised by email and I wanted to be able to shop online to save time pushing a trolley round the supermarket.”

Night Class in IT Skills

Ellie decided to enrol on a free night class organised at her local sixth form college to give currently unemployed people access to computer training. The course was a two hour a week class that ran for six weeks, giving a complete overview of using Word, Excel and the internet.

Ellie told us, “I was really nervous before the first class because I didn’t even know how to turn a computer on! I was sure that I would be the most useless person there so I really wasn’t very confident. My husband had to practically push me to go in! But I needn’t have worried as the people were lovely and there were plenty of others that knew as little as I did! I learnt so much in that first session – particularly that I couldn’t ‘break’ the internet by pressing the wrong button!”

After completing her six week course, Ellie was able to reapply to the NHS hospitals and local trusts that she had previously wanted to work with, and was pleased to be offered an interview, with a part-time position offered after her second interview. Although she was required to go back on a slightly lower grade than she had worked at previously, Ellie has been given access to a number of training courses to help her career prospects and is sure that she would not have been given this opportunity without attending the IT course.